aka the Unbearable Dogness of Izzi.

When my dog Isadora was still a tiny pup, I wrote about being a dog slave. I had been enjoying almost five years of dog freedom (after my big friendly Keylo Malamute died in 1996.) Training a puppy was definitely an adjustment: teaching her to use her doggie doors, walking on a leash, behaving (she never did learn that), food and treat schedules, and worst of all cleaning up after her. I was looking for that 2001 piece just now, but can’t find it. I did find the original of “The Divine Hamburger Lesson”  (that one is included in Seeing Clearly. ) That was a later lesson on tolerance and letting go. I was in a mood to rant and rail just now about caring for an elder dog , until I found this (something I wrote in 2008) and a reference that blows my mind:

Wu Wei: Harmony with the Tao

The goal of wu wei– also called the art of not doing– is to get out of your own way, so to speak. Example: when you are playing an instrument if you start thinking about how you are playing the instrument, it will interfere and soon you’ll make mistakes and get frustrated. Wu wei is called “aimless action”, because if you aim at a target and hit it, most likely you’ll develop anxiety about this goal. Zhuangzi, an ancient Chinese philosopher, writes about an archer who at first didn’t have anything to aim at. When there was nothing to aim at, the archer was happy and content just being. But, then he set up a target and “got in his own way.” He was going against the Tao and the natural course of things by having to hit that goal.

“A fully achieved person is like a spirit! The great marshes could be set on fire, but she wouldn’t feel hot. The rivers in China could all freeze over, but she wouldn’t feel cold. Thunder could suddenly echo through the mountains, wind could cause a tsunami in the ocean, but she wouldn’t be startled. A person like that could ride through the sky on the floating clouds, straddle the sun and moon, and travel beyond the four seas. Neither death nor life can cause changes within her, and there’s little reason for her to even consider benefit or harm.[1] 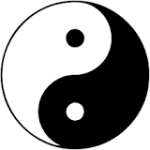 In other words, the Yin-Yang of living. If there were no yin, there would be no yang and if there were no yang, there would be no yin. A person who follows the wu wei (Way) realizes we cannot cling to good and avoid evil. A Taoist accepts both the good and the bad; in fact once we can accept any outcome, then we can release the need for goals.  Sounds great, but I’m definitely not there… yet.

This must have been early thinking for my Art of War work…  OH, I know.  I wanted to title Seeing Clearly the Wu Wei Way, but clearly I wasn’t there then, and still struggling with Letting Go.

Benjamin Hoff in The Tao of Pooh suggests that “Wei” means monkey/claw, and translates “Wu Wei” as “No Monkeying Around”.[2]

Alan Watts also has written a lot on Taoism and Wu wei.  (These days I listen to him on Youtube. Try this: Watts on Youtube

(I’ll try embedding that, later. IF you see this, JC, next up maybe importing that file we saved??)